how to effectively treat ingrown toenails?

Ingrown toenail is a quite common condition that can affect people of al-most all ages. Our youngest patient was an infant, and oldest were almost hundred years old. But the largest group of our patents are teenagers. This problem is usually caused by an improper care of nails and mistakes while cutting them, but also by many reasons we don't always have control over. The symptoms of an ingrown nails are pain, reddening and suppuration on the side of a nail, usually toenail.

Ingrown toenails is a problem caused by the congenital or acquired disproportion between the size of a nail plate and the height of nailfolds and nail bed. Ingrown nails usually oc-cur on big toe. It very rarely occurs in case of other nails of feet and hands.

Ingrown toenail is an incredibly painful and arduous condi-tion. It causes pain and reddening of the nail area, and the nail thrusts into the skin of a nailfold. Ingrown nail may cre-ate inflammatory granulation that suppurates and bleeds. In-grown nails often make it impossible to walk by causing pain even while wearing large shoes.

Nails may be ingrowing because of many reasons.

The most common cause is an improper technique of cut-ting them - cutting them too short or leaving chipped or sharp edges leads in many cases to ingrowing of a nail into the skin of a nailfold.

Other cause of ingrowing toenails is wearing too tight shoes with narrow tip. The pressure put on toenails may lead to their deformation. 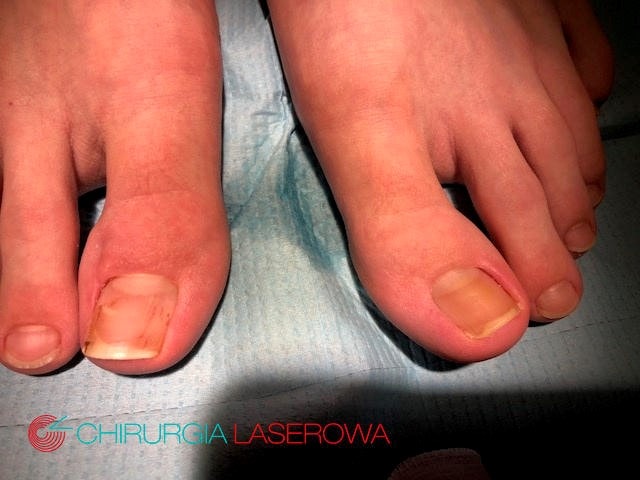 The basic symptom of ingrowing toenail is an oedema from one or both sides of toenail, reddening and pain of nailfold and suppuration.

In the initial phase the pain of a toe is felt only while walking, but over time it increases and makes it impossible to put shoes on.

During the further development of toenail ingrowing, it con-stantly goes deeper into a nailfold, the inflammation of nail-folds appears, and infection develops, most often with mixed bacterial flora, often with the presence of staphylococcus au-reus. Chronic inflammation further creates the overgrowth of nailfolds and creation of inflammatory granulation, which causes the entrapment of a nail in the surrounding tissue. In this stage a patient urgently needs help of an experienced surgeon.

Treatment of ingrowing toenails depends on the ad-vancement of inflammatory state, degree of nail plate defor-mation and condition of nailfolds.

In the initial state tamponade is usually used. It's a small dressing additionally soaked with a disinfectant, which is used to raise and separate the nail plate from the nail fold. We achieve similar effect by using plastic gutters, which we put under the edge of toenail's side corner.

Another method of correcting an ingrowing toenail in the first phase of ingrowing are wire buckles that are put on the cor-ners of a toenail. The least effective are stick buckles in form of a plastic strip on a nail plate, because often they cannot reach the corners of a toenail.

In more advanced stages of ingrowing, when the inflammato-ry granulation is already created, and an inngrown nailfold entraps a toenail, the only good solution to a problem is a precise surgery.

Removing part or whole toenail usually results in a relapse of this condition after around 3-4 months. Other surgical techniques like wedge resections with the stitching of a nail corner to the nailfold or removing only the inflammatory granulation don't give encouraging results - according to the statistics given on medical congresses, the problem relapses in various clinics in around 30-70% patients, and unfortu-nately concerns not only patients in Poland, but also the rest of the countries of Western and Northern Europe.

Seeing this problem, our laser surgery centre found an effi-cient and painless solution to this problem two decades ago already, introducing an innovative plastic surgery of ingrow-ing toenails by using laser techniques.

We achieved 100% effectiveness and no relapse of ingrowing

Procedures conducted by the use of laser enable us to quickly and in a single stage treat patients even in the most advanced stage of ingrowing with infection of staphylococ-cus.In this method there is no need for putting stitches dur-ing the procedure, or for further follow-up visits. Method and range of procedure is adapted to the individual needs of a patient.

It's important that a surgeon doesn't remove a toenail - it is totally unnecessary, even not recommended! The most important for the surgeon is to give the nail a proper shape after removing the changes, so the nail would later grow correctly.

These barriers may be overcome by conducting a laser procedure, even if the toe is in the inflammatory state, even if it is infected, i.e. with staphylococcus bacteria. It is possible, because the ray of laser not only stops the bleeding and evaporates the infected tissue, but it also works as an antiseptic and antibacterial.

In comparison to classic surgery methods, surgery with a laser technique has many advantages: